NOTO, THE CRADLE OF THE SICILIAN BAROQUE

Houses and mansions in the historic center overlooking the city

IN THE UNSPOILT NATURE OF VAL DI NOTO

A FEW STEPS FROM THE VAL DI NOTO BEACHES

Ideal villas and cottages for a Sicilian vacation

THE FORTIFIED CASALE OF PANTALICA

An ancient farmhouse near the Pantalica Reserve

In the town of Sortino, about 30 minutes from Catania airport, 40 minutes from Syracuse and 1 hour from Noto, in an open, panoramic position, overlooking the Gulf of Syracuse and Mount Etna, we propose: ancient fortified farmhouse dating back to 1700.

It is said that the farmhouse belonged to an ancient feud of marquisate. It included the main residence of the feudal lord, the warehouses where the fruit was collected, the houses and the church of the feud. The main residence had the structure of the manor houses of the time: on the ground floor there were large warehouses with stone vaults (some of them still present). On the upper floor there was a private residence with a large panoramic terrace overlooking the whole estate. The terrace was supported by stone arches, still visible. A room adjacent to the main residence still preserves the ceilings with cross vaults still intact and of beautiful workmanship.

In the part used for warehouses and dwellings we find the plaster of the period that resists on a healthy masonry, despite the bad weather. In the most dominant part, built on natural outcropping rock, stands out the church of the feud that still preserves carved stones on the façade. The house develops on about 740 square metres, and overlooks the property land of about 5700 square metres. There is an ancient cistern dug into the natural rock. Electricity on the border.

The place is very fascinating, 10 minutes away from various naturalistic and archaeological attractions: The rock necropolis of Pantalica, UNESCO site, the Anapo valley as well as the various late Roman and Byzantine settlements scattered in the surrounding area. 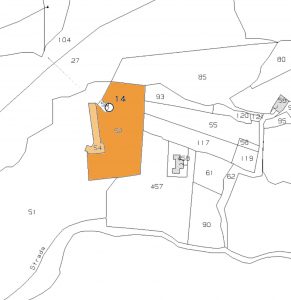